Tangent started as a series of one-shots in 1997, followed by a second series in 1998.  Finally, a 12 issue maxi-series was published in 2008 to cap it off.  It is possible to bind all of the comics into one volume, although some would prefer to keep the later series separate from the first two.

All of the one-shots show this same order in the back, and most of them are self-contained.

Phase 2:  1998
Tales of the Green Lantern
Powergirl
Wonder Woman
The Trials of the Flash
Nightwing:  Night Force
The Superman
The Joker’s Wild
The Batman
JLA

Figuring out the order of these one-shots was a little bit trickier, as there was some plot points that were shared and referenced between the different books.  On top of that, there was no consistent list in any of the books.  This is not the reading order presented in the official trades, or even floating around much of the internet.  Thanks to canaryfarmer at the Uncollected Editions boards for his mapping, and explanations, which I have adapted here:

Justice League of America #16 also has a backup feature that is not related to Tangent.  It does share the final page, so a scan-and-print is necessary.  “History Lesson” is a backup feature from Superman’s Reign #1-11.  The trades put it in the front of the books, but this page presents a case for leaving them after the main narrative.  Ion #9-10 also has stories that tie into Tangent, and would go right before JLA #16, but they aren’t necessary at all. 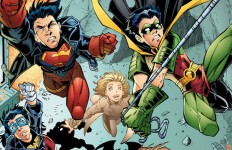